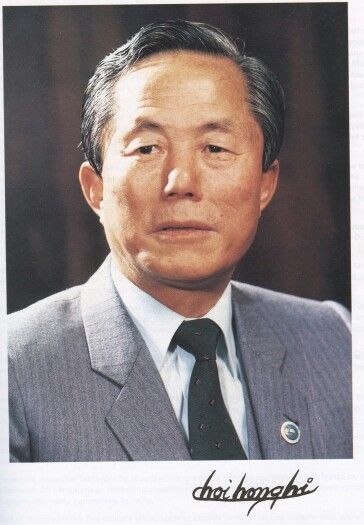 Although the origins of the martial arts are shrouded in mystery, we consider it an undeniable fact that from time immemorial there have been physical actions involving the use of the hands and feet for purpose of self-protection.

If we were to define these physical actions as "Taekwon-Do," any country might claim credit for inventing Taekwon-Do. There is, however, scant resemblance between Taekwon-Do, as it is practiced today, and the crude forms of unarmed combat developed in the past.

Modern Taekwon-Do differs greatly from other martial arts. In fact, no other martial art is so advanced with regard to the sophistication and effectiveness of its technique or the overall physical fitness it imparts to its practitioners.
Since the theories, terminology, techniques, systems, methods, rules, practice suit, and spiritual foundation were scientifically developed, systematized, and named by the author, it is an error to think of any physical actions employing the hand and feet for self-defence as Taekwon-Do. Nor is any other martial arts system entitled to call itself Taekwon-Do. Only those who practice the techniques based on the author's theories, principles and philosophy are considered to be students of genuine Taekwon-Do.

When and where did Taekwon-Do begin?

A combination of circumstances made it possible for me to originate and develop Taekwon-Do. In addition to my prior knowledge of Taek Kyon, I had an opportunity to learn Karate in Japan during the unhappy forty years when my native land was occupied by the Japanese. Soon after Korea was liberated in 1945, I was placed in a privileged position as a founding member of the newly formed south Korea Armed Forces.The former provided me with a definite sense of creation, and the latter gave me the power to disseminate Taekwon-Do throughout the entire armed forces, despite furious opposition.

The emergence of Taekwon-Do as an international martial art in a relatively short period of time was due to a variety of factors. The evils of contemporary society (moral corruption, materialism, selfishness, etc.) had created a spiritual vacuum. Taekwon-Do was able to compensate for the prevailing sense of emptiness, distrust, decadence and lack of confidence.

In addition, these were violent times, when people felt the need for a means of protecting themselves, and the superiority of Taekwon-Do technique came to be widely recognized. My social statue, the advantage of being Taekwon-Do's founder and my God-given health also contributed to the rapid growth of Taekwon-Do all over the world.

My involvement with the martial arts did much to supplement the health that God gave me. I had been born frail and weak and was encouraged to learn Taek Kyon at the age of fifteen by my teacher of calligraphy. In 1938, a few days before I was due to leave Korea to study in Japan I was involved in an unexpected incident that would have made it difficult to return home without risk of reprisals.
I resolved to become a black belt holder in Karate while I was in Japan.

The skills I required were, I felt, sufficient protection against those who might seek to do me harm. Not only was I able to return to Korea, but I subsequently initiated the national liberation movement known as the Pyongyang Student Soldier's Incident. Like so many patriots in the long course of human history, my actions aroused the wrath of those in positions of power. I was imprisoned for a time in a Japanese army jail. In January of 1946,1 was commissioned as a second lieutenant in the fledgling Republic of Korea army and posted to the 4th infantry regiment in Kwangju, Cholla Namdo Province as a company commander.

I began to teach Karate to my soldiers as a means of physical and mental training. It was then that I realized that we needed to develop our own national martial art, superior in both spirit and technique to Japanese Karate. I strongly believed that teaching it throughout the country would enable me to fulfill the pledge I had made to three of my comrades, who had shared my imprisonment by the Japanese. "The reason that our people suffer in this way at the hands of the Japanese," I had said, "is that our ancestors failed to rule wisely."
“They exploited the people and, in the end, lost the country to foreign domination. If we ever regain our freedom and independence, let us not become the rulers of the people. Instead, let us dedicate ourselves to advising those who rule.”

It was with this ambition in mind that I began to develop new techniques, systematically, from March of that same year. By the end of 1954 I had nearly completed the foundation of a new martial art for Korea, and on April 11, 1955, it was given the name “Taekwon-Do”.
On the spiritual level, Taekwon-Do is derived from the traditional, ethical and moral principles of the Orient and, of course, from my personal philosophy.
Even though I am only five feet tall, I pride myself on having lived in strict accordance with my moral convictions. I have tried to fight on the side of justice without fear of any kind. I believe that this was possible for me only because of the formidable power and indomitable spirit instilled by Taekwon-Do.
The physical techniques of Taekwon-Do are based on the principles of modern science, in particular, Newtonian physics which teaches us how to generate maximum power. Military tactics of attack and defense have also been incorporated.
I wish to make it clear that although Taek Kyon was used as references in the course of my study, the fundamental theories and principles of Taekwon-Do are totally different from those of any other martial art in the world.

In March of 1959, I led the military Taekwon-Do demonstration team on a tour abroad. We visited South Vietnam and Taiwan. It was the first such visit in the history of Korea. On this occasion, I renewed my resolution to leave my personal legacy to the world, in the form of Taekwon-Do, and I formulated the following basic ideals for the Taekwon-Do practitioners:
1. By developing an upright mind and a strong body, we will acquire the self-confidence to stand on the side of justice at all times.
2. We shall unite with all men in a common brother-hood, without regard to religion, race, national or ideological boundaries.
3. We shall dedicate ourselves to building a peaceful human society in which justice, morality, trust and humanism prevail.
I also resolved to dedicate myself to the world-wide propagation of Taekwon-Do, in the sincere hope that it would provide the means by which the unification of the divided halves of my fatherland would become possible.
Life and work become one.

My study of Taekwon-Do proceeded in two parts, spiritual discipline and technical perfection. Because the human spirit belongs to the realm of metaphysics, what I mean by spiritual discipline is not easy to describe. One cannot touch, see or hear the spirit of man.
It is wider and deeper than anything we can perceive. >
In this respect, I, myself, am only another student participating in a continuing and never-ending learning process.
I have come to define the spiritual dimensions of Taekwon-Do as fusing oneself with the ideals of Taekwon-Do and attaining and understanding the full meaning of each of the Taekwon-Do patterns. If we consider ourselves as one with Taekwon - Do, we will respect it as we respect our own bodies and Taekwon-Do will never be used in a dishonorable way.
The names of the patterns are derived from the most illustrious people to have been produced by nearly five thousand years of Korean history. A proper understanding of the patterns leads, inevitably to the realization that Taekwon-Do is a martial art to be used only for self-defense and only in the cause of justice.
The history of Korea contains not a single sample of its military forces being employed for the invasion of its neighbors or for any other purpose except national defence.

In the technical area, I created a wide variety of techniques that can be used in almost any situation. They are based on the following principles;

1. All movement should be designed to produce maximum power in accordance with scientific formulas and the principle of kinetic energy.

2. The principles behind the techniques should be so clear that even those ignorant of Taekwon-Do will be able to distinguish correct from incorrect movement.

3. The distance and angle of each movement should be exactly defined in order to achieve more efficient attack and defense.

4. The purpose and method of each movement should be clear and simple, in order to facilitate the teaching and learning process.

5. Rational teaching methods should be developed so that the benefits of Taekwon-Do can be enjoyed by everyone, young and old, men and women.

6. Correct breathing methods should be devised, enhancing the speed of each movement and reducing fatigue.

8. Each attacking tool should be clearly defined and soundly based on the structure of the human body.

9. Each movement should be easy to execute, enabling the student to enjoy Taekwon-Do as a sport and recreation.

10.Special consideration should be paid to promoting good health and preventing injuries.

11. Each movement should be harmonious and rhythmical so that Taekwon-Do is aesthetically pleasing.

12.Each movement in a pattern must express the personality and spiritual character of the person it is named after.

Adherance to these basic principles is what makes Taekwon-Do a martial art, an aesthetic art, a science and sport.